Canada’s pharmacists say they can vaccinate up to three million people a week against COVID-19, but governments across the country have largely kept these health care providers in the dark about what role they might play once more shots are delivered.

With vaccination of the general population set to begin in just two months’ time, pharmacists and the country’s largest chain, Shoppers Drug Mart, have so far had only preliminary discussions with some provincial leaders about how the nation’s largest immunization campaign will unfold.

“We’re anticipating pharmacists will play a role somewhere down the line. I guess what we’re not clear on yet is exactly when,” Joelle Walker, the vice-president of public affairs at the Canadian Pharmacists Association, told CBC News.

The country’s 11,000-plus pharmacies should be equipped to administer the vaccine, given their years of experience with the flu shot campaign, but facts about their possible role in the COVID-19 vaccination program have been scant.

Walker said the annual flu shot campaign, while large, is a much smaller endeavour than the COVID-19 vaccination campaign — and it still takes months to plan.

“It’s definitely concerning because there is a lot of work to be put into these things. Pharmacists need to know roughly when they might expect the vaccines, the kind of quantities and who they’ll be targeting,” she said. “Bringing pharmacists in at the front end of planning would be helpful.

“The message to the government really is, ‘If you don’t have those conversations early on, it does open up the possibility that things aren’t going to go as smoothly as Canadians expect.’ Now is the time to have those more concrete conversations.”

Walker said getting vaccinated at a pharmacy is convenient — 90 per cent of Ontario residents, for example, live within a five-kilometre drive of one. And pharmacies are often the only health care options in rural and remote communities where access to primary care is limited, she added.

Pharmacies are also accustomed to managing patient notifications and refills, which makes them well-equipped to track the two-dose regime for the Pfizer and Moderna products, she said.

“Because the health systems are so tapped out with nurses and physicians on the front line in acute care — we don’t have an infinite bandwidth of providers — pharmacies are absolutely the natural place to do this,” Walker said.

Immunization campaign off to a slow start

The Canadian immunization campaign has gotten off to a slow start. A month into the inoculation efforts, barely one per cent of the population has received at least one shot of the Pfizer or Moderna products.

Tens of thousands of the estimated 605,000 doses that the federal government has so far shipped to the provinces and territories are sitting in freezers. Manitoba and Nova Scotia have been particularly slow out of the gate, using less than half of the shots they have received.

The United Kingdom and the U.S. have vaccinated more people per capita than Canada. They’ve also released detailed plans explaining how pharmacies will fit into the vaccination effort.

The U.K., for example, started identifying pharmacies in November as suitable vaccination centres. 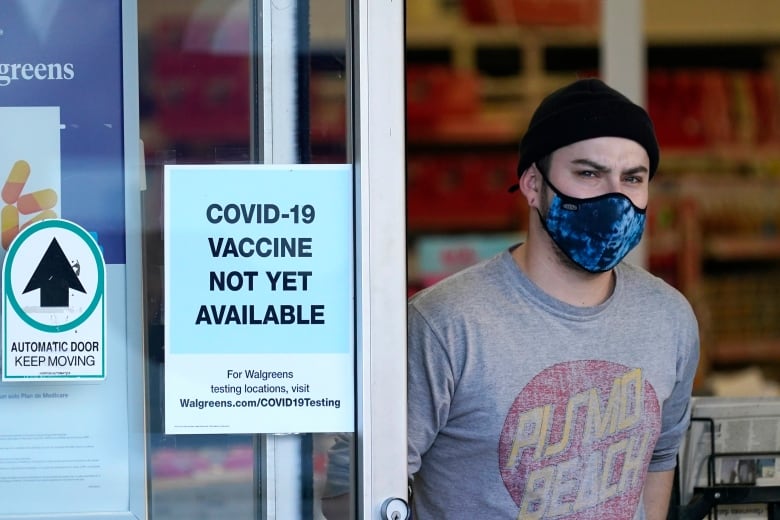 A customer wearing a mask walks out of a Walgreen’s pharmacy store and past a sign advising that COVID-19 vaccines are not yet available on Dec. 2, 2020, in Seattle, Washington. (Elaine Thompson/AP Photo)

More than 11,500 such sites in the U.K. have been chosen so far to help administer shots over the course of 2021. They’re high-volume community druggists that have the capacity to administer 1,000 vaccines each week while maintaining stringent cold storage requirements. The National Health Service has said more pharmacies could be added to the list.

This week, 200 pharmacies started administering the shot to U.K. residents and eligible patients are able to book their vaccination appointments online.

Some U.K. pharmacists could also be put to work in community spaces, such as schools and churches, that have been converted into makeshift clinics.

The American inoculation campaign began in earnest last week at community pharmacies and at the in-store pharmacies of some grocery chains. With advance notice, the chains were able to recruit thousands more pharmacists and technicians to help. Walgreen’s alone has 45,000 people now qualified to administer shots. 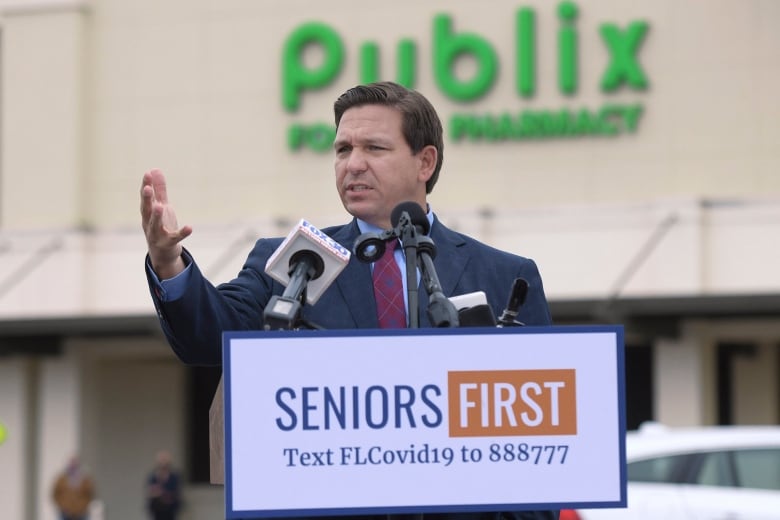 Tens of thousands of U.S. drug store locations, and big box stores like Costco and Walmart, will soon be vaccinating health care and front line workers and — after a change in federal policy on Monday — Americans over the age of 65.

All told, 60 per cent of all pharmacies in the 50 states, the District of Columbia, Puerto Rico and the U.S. Virgin Islands have signed a deal with the U.S. government to receive doses.

Canada’s pharmacies could do 3 million shots a week

In Canada, the federal government has said it expects immunization for the general population to begin sometime in April. Provincial health authorities will decide how to distribute the vaccine to their residents and the actual rollout could work differently in various parts of the country.

Jeff Leger is the president of Shoppers Drug Mart, Canada’s dominant pharmacy chain. He said contact between his company and provincial and territorial leaders has improved over the past week as provinces began to shift from phase one of the vaccine rollout — immunizing particularly vulnerable people, such as long-term care home residents, some Indigenous adults and health care providers — to planning for a wider rollout.

“I’m confident we’ll get some firm plans over the next couple of weeks. I would say they’re very interested in having our help,” Leger told CBC News. 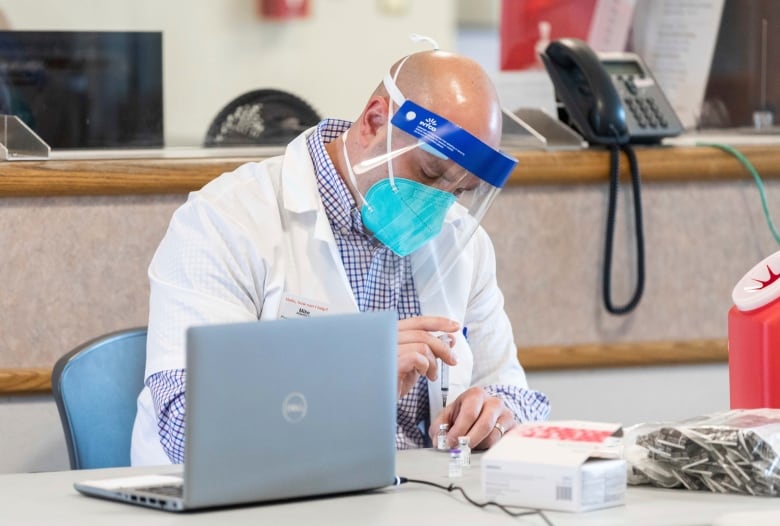 Mike, a pharmacy manager at CVS Health, gets the COVID-19 vaccine ready at the Soldiers’ Home in Holyoke, Mass. (Leon Nguyen/The Republican via AP Photo)

This week, Alberta Premier Jason Kenney said the general population in his province would have access to shots by summer. Pharmacies are expected to play a crucial role in that effort.

Ontario detailed its immunization plans for the second phase of the rollout on Wednesday, indicating that pharmacies and clinics might be brought into the vaccination program as its focus shifts from long-term care homes to other populations.

“Some of the details around who will do the work within those [next] phases is now being fleshed out. We’ve been getting very positive feedback from the provinces who say that pharmacies will play a role in that — and I think they like the capacity,” Leger said.

The sheer number of vaccinations that pharmacies can administer is impressive.

During the last flu shot campaign, some of the company’s busiest stores were administering as many as 600 shots a day, Leger said. Shoppers Drug Mart and pharmacies owned by the Loblaw grocery chain vaccinated 500,000 people a week against the flu, he said — a figure that could have been even higher had there been more doses available.

Leger said that if all of Canada’s pharmacies are mobilized, several million shots could be delivered each week.

“I think it’s probably in the range of 2.5 to 3 million if all pharmacies are participating. The limiting factor is vaccine availability,” he said.

“As soon as it becomes available, we’re ready to help vaccinate. All Canadians would love for it to come as quickly as possible.”