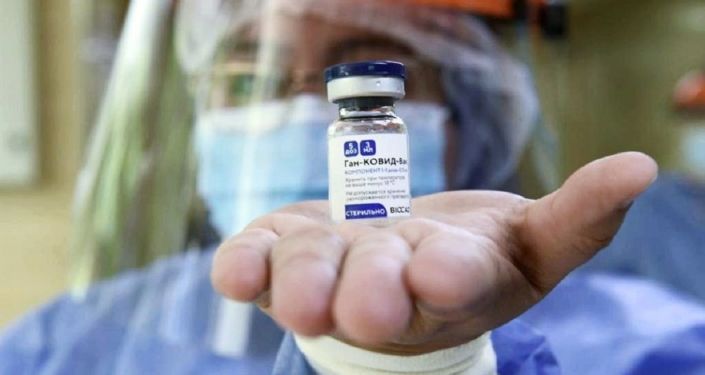 When asked by Sputnik about global expansion plans in the vaccine rollout, Mr Dmitriev explained Sputnik V was being manufactured in four nations – Russia, India, South Korea and Brazil – with the capacity to supply doses to 500m people.

But the RDIF also planned to expand operations to an additional seven countries, and efforts to work with the United States had been launched in August, shortly after the vaccine’s approval and registration, he said.

Russia was also the first to propose a partnership on the Oxford-AstraZeneca vaccine, providing doses of the Russian vaccine along with its British-Swedish counterpart, and was set to announce joint work with Chinese manufacturers.

“We need to have vaccines above and beyond politics. We need to be partners in this, and forget about anti-Russian, anti-European or anti-American cliches. and really work together as humanity to solve this issue, and we are completely committed to this partnership approach,” Dmitriev explained.

Speaking on Latin America, Dmitriev said that Sputnik V was been chosen due to its approach via a “safe adenoviral platform that has been tested for decades in more than 250 clinical trials”, with efficacy rates of over 90 percent.

But Latin American partners were not concerned about politics, but rather the fundamentals of vaccines, he said.

Sputnik V was also one of the top vaccines globally with a transport temperature of 2 to 8 degrees Celsius compared with -70 C temperatures of others, and minimised “strong allergic reactions” along with 50 to 70 percent cheaper pricing.

The vaccine had also found success in Argentina, with Bolivia and Venezuela registering the jabs, he said, adding he expected Mexico to sign up “soon”.

Outside of the LatAm market, registrations had taken place in Israel and Palestine, Serbia, and Belarus, with a further nine expected by the end of January in the Middle East, North Africa (MENA), Latin American, and Asian markets.

“Once again, we’ve come a long way from being the first COVID vaccine in the world to being registered in many markets [globally], and what’s important is that we have and can supply vaccines right now in January and February”, he said.

A further seven to eight countries were set to receive Sputnik V supplies by the end of the first quarter, accounting for up to 25 percent of the global market share outside of Russia, he said, citing RDIF estimates.

Potential Registration in the European Union

When asked by Reuters bureau chief of Russian and CIS, Andrew Osbourne, on whether Russia expected the EU to approve Sputnik V for use in the Eurozone, he said that understood that “politics will play a role” in ongoing talks.

But transparency was key to the approval process, Dmitriev said, citing a scientific review application filed on 22 October, upcoming talks on 19 January and further document submissions to the European Medicines Agency in February.

Russia would also share data with the EU on Day 3 trials of roughly 33,000 people as well as findings on Sputnik V from the United Arab Emirates, India, Venezuela and Belarus, he added.

“The predicament of the world right now is that there are not enough vaccines in the world. Russia’s vaccine is one of the best, and we would be happy to provide all the information to the European regulators,” The RDIF chief executive said.

Speaking on the Western media, Dmitriev said that some reports had gone beyond “fake facts” and had turned into “fake storytelling”, with sources attempting to find “a new angle of attack” from August last year.

“So, even before the vaccine was registered, there were attacks [that it] had been stolen, [or that] it wasn’t efficient. But what we’ve always done is, over the last four to five months, answered all questions”, he said, citing data from previous studies.

Dmitriev added that allegations of a struggle with domestic and foreign vaccine rollouts revealed that some Western reports were attempting to block Russian efforts to work with other nations “by raising concerns on domestic supply”.

“They will fail, just as they failed with the over 60 fake narratives we have seen since August. Every time, it’s a new angle and attempt to constrain Russia. And they will fail, because we will supply Russian regions and the Russian government is doing so, and we believe that all the people that want to get vaccinated [can do so] in the next four to five months,” he said.

The Reuters NEXT summit is taking place 11 to 14 January and is one of the largest events in the world, joining nearly 25,000 journalist, business executives, journalista and world leaders to discuss business, politics, tech and media.